On Thursday, my husband took Selina to the oncologist. Apparently the techs all had to come into the room because there was word there was an adorable kitty in the house.  She purred when the techs and doc came in. She is such an easy going little lady. But enough small talk!  The oncologist is not recommending any chemo as the cancer is gone!  The surgeon was not sure if that would be a possibility, so had prepared us for that option.  Howver, she did notice that her thyroid has a small slip which she has some cocern over. She did say that might be as a result of major changes in Selina’s life over the last month, so its something to monitor. The other thing to monitor is the reoccurance of cancer. So she will have chest xrays every three months for the next year. If it continues to stay clear, we can bump the time frame to 4-6 months.

The doctor did stress to my husband that the osteosarcoma has shortened Selina’s life expectacy. While I think I knew that, I didn’t want to hear it. And I still don’t. One thing I have learned and was reminded from this site is that we honestly never know what will happen and we need to live each day to its fullest. They say cats have nine lives, and she may have used one up, but she still has 8 left! We will be pawsative and she will keep kicking with her good back leg! 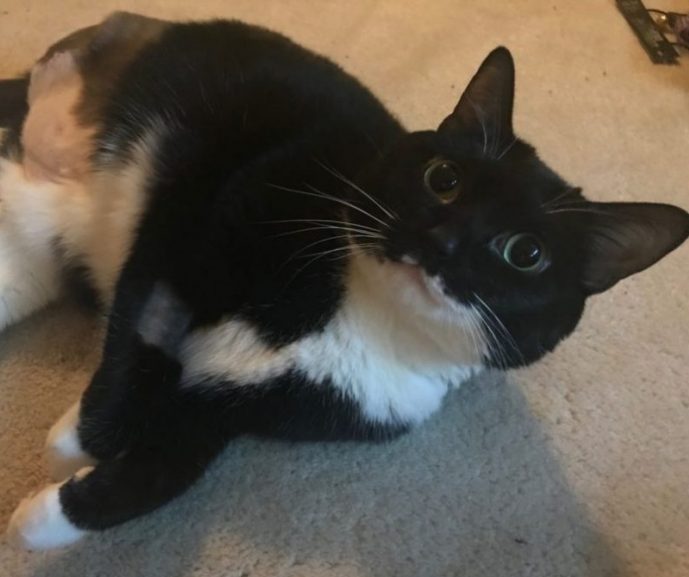 We adopted Selina Kyle (AKA Cat Woman) when she was 8 weeks old, but we met her at our neigbors's house when she was about 3 weeks old. They are fosters for the local SPCA. She was just diagnosed with osteosarcoma about a week and half after she started to limp and surgery was performed that day. View all posts by catwoman

This site uses Akismet to reduce spam. Learn how your comment data is processed.

About Your Tripawds Blog:

New Tripawds Bloggers: Please review your default first blog post at left for lots of helpful links for getting started with your blog or review the Help Videos in your dashboard. Edit these widgets from your Appearance settings to remove this notice, upload a custom header photo, or choose from 130+ themes, and much more!

I am Selina Kyle, hear me purr is brought to you by Tripawds.
HOME » NEWS » BLOGS » FORUMS » CHAT » YOUR PRIVACY » RANDOM BLOG